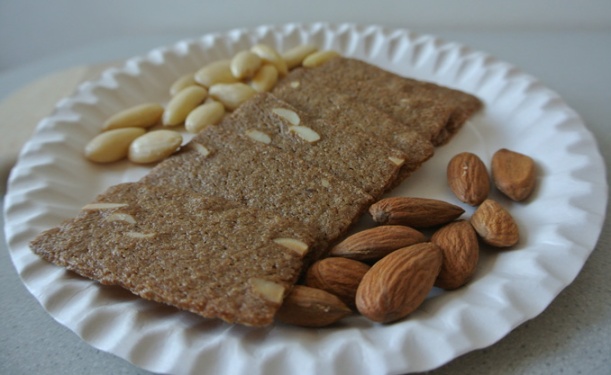 Almond kernels both blanched and in their skins, along with some almond thin biscuits.

Week 5 of the Bakeoff was pastry week, and Mary set the bakers the preparation of a British classic for the technical challenge. Bakewell tart, evolved from the older Bakewell pudding, has traditional links to the Derbyshire town of Bakewell, and while a number of different forms of the pudding have been recorded in recipe books over the last 200 years, all of them share almond as a common flavouring. Almonds have long been a popular food eaten either as a snack or as an ingredient of a sweet or savoury dish, and they can be processed into other ingredients such as almond flour and almond milk as well. Their distinctive scent has a surprisingly simple chemical origin, which we can take a moment to explore here.

1.    The flavour of almonds may be very familiar to many, but it tells only half the story of the seeds, as two types exist – sweet and bitter. This distinction is extremely important as bitter almonds contain a high concentration of hydrogen cyanide, a fatal dose of which for an adult could be around 50 bitter almonds. Sweet almonds also contain hydrogen cyanide but at a concentration some 40 times lower than the bitter seeds, well below dangerous levels. Whether a tree produces sweet or bitter almonds depends on a single gene so the sweet variety was bred selectively by humans thousands of years ago, though exactly how they separated the sweet from the bitter is unclear.

Sweet almonds can be eaten as a snack, raw or toasted, but in Europe it is probably more common to find them as an ingredient in baking; macaroons, marzipan and nougat are just a few traditional almond-flavoured sweets. For cooking and baking, almonds can be bought whole, flaked or ground, and it is also possible to add “almond extract” which is distilled from the essential oil of bitter almonds. Middle Eastern cooking tends to use whole almonds more frequently, either as a sweet snack by coating almonds in sugar and rosewater (“noghl”) or savoury by eating the ripening fruit, which are green and soft, with salt. Apricot kernels, found inside apricot stones, are very similar to bitter almonds in both flavour and toxicity and are often used as a bitter almond substitute in small amounts, such as in amaretti biscuits.

2.    The smell of almonds comes from a small molecule called benzaldehyde, shown on the right. This is the simplest aromatic aldehyde and it comprises about 90% of the essential oil of bitter almonds, as well as being used as the major component in artificial almond flavouring. It is produced industrially from a range of precursors, but most often by oxidation of toluene in air. This method is not particularly subtle or elegant, as it also forms unwanted side products, but this serves as a reminder that what looks good on paper or on a lab bench may not be industrially suitable for practical or economic reasons.

Benzaldehyde has applications beyond being an almond flavouring; for example, it is used to make the dye “malachite green”. This is one of the family of dyes called “aniline dyes” which also includes mauveine, the first ever synthetic dye. It is a cation with multiple conjugated double bonds which enable it to absorb visible light.
The source of the benzaldehyde in bitter almonds are two closely related compounds called amygdalin and prunasin – amygdalin is also found in apple pips and the kernels of plums and peaches. When the amygdalin and prunasin come into contact with water they are broken down by enzymes into glucose, benzaldehyde and hydrogen cyanide, as shown by the scheme below. This was first established by Liebig and Wöhler, but since their paper is in German many readers may find it easier to look at this later paper on the acidic hydrolysis (breakdown in water) of amygdalin. This breakdown is the source of the cyanide which makes bitter almonds poisonous. Sweet almonds do not contain the enzymes required to effect this transformation, so they are not toxic but nor are they useful for producing the benzaldehyde-rich almond extract.

Reaction scheme of the enzymatic breakdown of prunasin and amygdalin

This pathway is also the reason for the well-known factoid that apple pips (in large quantities) are poisonous, which perhaps unsurprisingly never caught on for peaches or plums.

Production of almonds is now sufficiently controlled that there is a negligible risk of eating any dangerous bitter almonds, which is certainly a good thing for the ongoing popularity of baking both on television and at home.