Week 9 of the Bakeoff was patisserie week, in which the bakers were required to tackle three classic challenges of elegance and finesse – palmiers, Savarin and fondant fancies required the bakers to display their command of a range of techniques as well as delicious flavour combinations. Patisserie is often characterized by light, delicate creations and while the judges in the tent carefully considered the textures of the contestants’ offerings, we can consider the various methods bakers everywhere have to control texture by making things rise during cooking.

Puff pastry is distinguished by the formation of many layers, or “laminations”, as were clearly visible in the bakers’ signature palmiers and can be seen in the photo of an apple marzipan galette (above). This kind of pastry is also used to make traditional favourites such as strudel, sausage rolls and Beef Wellington. The pastry is made by placing a layer of butter on top of a layer of dough and then repeatedly folding over and rolling out the mixture. The aim is not to incorporate the butter into the dough fully but to create many thin layers which expand on cooking to give a light puffy texture. As this is relatively time-consuming a number of faster ways to achieve a similar effect, such as rough-puff pastry, have been developed.

The next challenge was to make a Savarin; this sponge cake is baked in a mould before being soaked in a liqueur syrup and topped with cream and fruit. It is unusual in that it is raised with yeast, a method generally reserved for baking bread, while cakes are generally leavened with baking powder. In fact the end result is very similar, since both yeast and baking powder produce bubbles of carbon dioxide which give cakes and bread their similar textures and internal appearances.

For their showstopper challenge the bakers made fondant fancies, employing genoise sponge as the base for their colourful iced cakes. Genoise is another unusual cake in that it does not contain any raising agent at all – the bubbles in the sponge are simply tiny air bubbles which expand while the sponge is baked. The air is put into the batter before baking by whisking extensively; the eggs in the mix enable tiny air bubbles to be trapped much like when meringue is made by whisking egg whites, but due to the presence of fatty egg yolks a relatively small amount of air is retained by the mixture. This means that while the Genoise sponge may look similar to the Savarin, it is raised in a manner similar to puff pastry. The key difference is that the bubbles in Genoise come from expanding air, whereas the laminations in puff pastry are made by the expansion of steam as the water in the dough is heated. 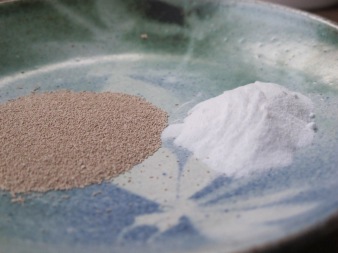 We have now looked at mechanical leavening (air and steam) and biological leavening (yeast), but we have not looked at chemical methods, which are very familiar to home bakers. Baking soda, NaHCO3, has been used for many years as a chemical raising agent and is occasionally still used today. It works because it reacts with acids to give carbon dioxide, water and a salt – for example, its reaction with acetic acid (vinegar) is described by the reaction:

When baking with pure baking soda it is therefore necessary to add an acid such as lemon juice, vinegar or cream of tartar (a potassium salt of tartaric acid). There are perhaps two problems here from a baker’s point of view, however. Firstly, the salt by-product of the reaction may give an unwanted taste to the final product. Secondly, the reaction between the bicarbonate and the acid may begin as soon as these ingredients are added, so the mixture will start to bubble and lose gas before it is baked; this will reduce the amount by which it will rise in the oven. 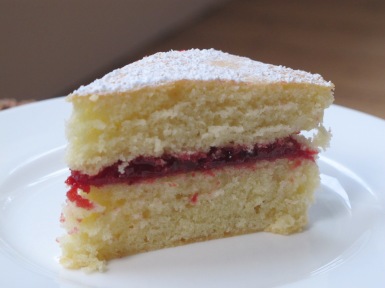 A slice of Victoria sandwich, raised with baking powder

To solve these problems, baking powder was developed in the mid-19th century and is now widely used commercially and at home. Baking powder is a dry mixture of sodium bicarbonate, one or two inorganic acid salts (as opposed to the organic acids mentioned above) and starch to make the mixture easier to use. The mixture is unreactive when dry, but the acid-base reaction to produce CO2 can occur when the powder is mixed with water. The acid can be selected to react with the bicarbonate immediately (“fast-acting”) or not until the mixture is heated in an oven (“slow-acting”) – a baking powder which contains some of each is called “double-acting”.

Over the course of the Bakeoff the contestants have made use of all of these different ways to make their bakes rise – it is almost certain that some of them will reappear in next week’s final.