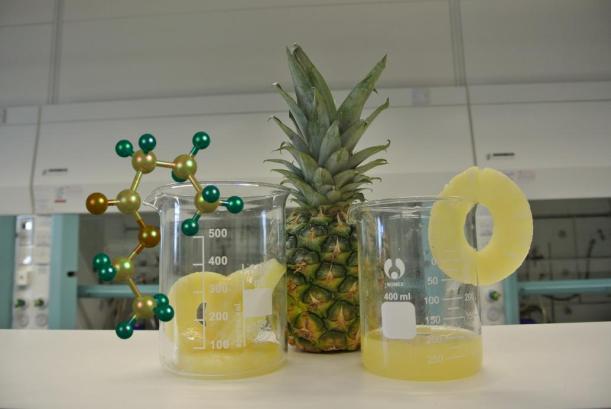 Pineapple rings and pineapple juice in beakers alongside a fresh pineapple and a molecule of ethyl butanoate.

As we are nearing the so-called “hunger gap”, a time of year where few fresh fruit and veg can be harvested in North Western Europe, our thoughts turn to more exotic fruit such as the pineapple. Not just does it have a fresh and fruity smell and flavour, essential to exotic drinks and dreams of nicer weather, but it also contains enzymes which can tenderise meat, including your tongue.

1. In the picture above you can see a fresh pineapple between beakers of pineapple juice and pineapple slices. The molecule shown on one of the beakers is ethyl butanoate, an ester that has the aroma of pineapples. Beakers are used in most chemical laboratories to contain and measure chemicals and are available in a range of sizes.

The pineapple is a tropical plant that is a member of the Bromeliaceae family. The name pineapple was originally used in English to describe an organ of the Conifer tree which we now know as pine cones. The name was also used for the fruit of the pineapple plant due to their resemblance to the original name-holder. Pineapples are known by a variety of different names, such as piña, abacaxi or ananas in Spanish, Portuguese and French respectively.

The pineapple plant is native to southern Brazil and Paraguay (see the following page for lots! more information on Pineapples: J, Morton, Fruits of warm climates, J. F. Morton, Miami, 1987, pg. 18-28), but is now grown all over the world. Costa Rica is currently (2016) the top producer of pineapples with 2.7 million metric tons, followed by Brazil and the Philippines. The pineapple plant was also transported from its original territory to the Caribbean by native Indians who called it “anana”, which translates to ”excellent fruit”. In the Caribbean Christopher Columbus first encountered this exotic fruit in 1493, while exploring the island of Guadeloupe. Columbus brought the sweet fruit back to Europe where it became a symbol of wealth and privilege (the social history of the pineapple is explored here). 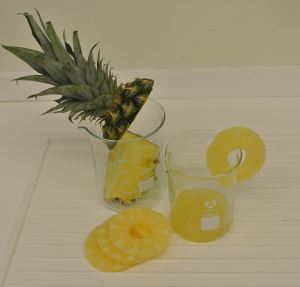 Pineapples make a great and healthy snack (but are perhaps more often ingested in juice form, with thanks to the piña colada!) due to their high vitamin C and manganese content (nutritional information, see also the following infographic). They also contain a high concentration of bromelain, a proteolytic mixture of enzymes that are responsible for the tenderisation of the tongue often experienced when pineapples are consumed (more on this later), but also for the medicinal uses of this plant.

2. Esters are molecules which contain the ester functional group (R-COO-R’); note that the carbonyl group (C=O) is a part of this. Esters often have distinct aromas; those with a small number of carbons tend to smell of typical organic solvents (think glues) whereas those with longer carbon chains have more interesting smells that are often described as similar to those of fruits (Fig. 1). We rather enjoyed this chart of ester scents over on James Kennedy’s page.

Figure 1: The structures of some esters and their aromas.

It is worth noting that scents can be very subjective such that descriptions for the scent of butyl methanoate range from raspberry to fruity and rum. (See our post on raspberries, if you are interested in another of the key molecles, raspberry ketone.) Ethyl butanoate is an ester that has the aroma of pineapples.

Esters are synthesised by reaction between a carboxylic acid (R-COOH) and alcohol (R-OH). The reaction requires an acid catalyst, such as sulphuric acid (H2SO4), to produce the ester and water as a by-product. Ethyl butanoate can be synthesised in the lab by reaction of butanoic acid with ethanol (Scheme 1). Our post on bananas shows a similar synthetic route for isoamyl acetate (3-methylbut-1-yl ethanoate), giving rise to the scent of bananas.

Scheme 1: The synthesis of ethyl butanoate from the acid catalysed reaction of a butanoic acid and ethanol.

3. Many people experience tenderisation of the tongue when they consume pineapple, which is due to a substance known as bromelain. The term bromelain refers to the cysteine proteolytic enzymes found in the pineapple fruit and stem (proteolysis refers to the digestion of proteins). The bromelains extracted from stem and fruit in pineapples are in fact mixtures of different enzymes and therefore have different enzyme commission numbers (EC):
Stem bromelain – EC 3.4.22.32
Fruit bromelain – EC 3.4.22.33

Stem bromelain is most commonly used as it is cheap to produce from the stem, a waste product in commercial pineapple production; it also has a much higher bromelain concentration. Bromelain has been used for medicinal purposes to treat arthritis (S. Brien, G. Lewith, A. Walker, S. M. Hicks and D. Middleton, Evidence-Based Complementary and Alternative Medicine, 2004, 1, 251-257), as an anti-inflammatory and also in skin debridement of burns (H.R. Maurer, Cellular and Molecular Life Sciences, 2001, 9, 1234-1245).

Bromelain has also found a use in the culinary world, as a meat tenderiser. The enzymes in bromelain are responsible for this effect through the breakdown of peptide bonds (Scheme 2) in protein structures, such as the collagen in steaks.

Scheme 2: A proposed mechanism for the breakdown of a peptide bond by a cysteine protease.

The same process happens to the tissue of your tongue, but don’t worry, your body soon metabolises the bromelain and regenerates the proteins, not interfering with your enjoyment of this tropical fruit and your dreams of better weather.