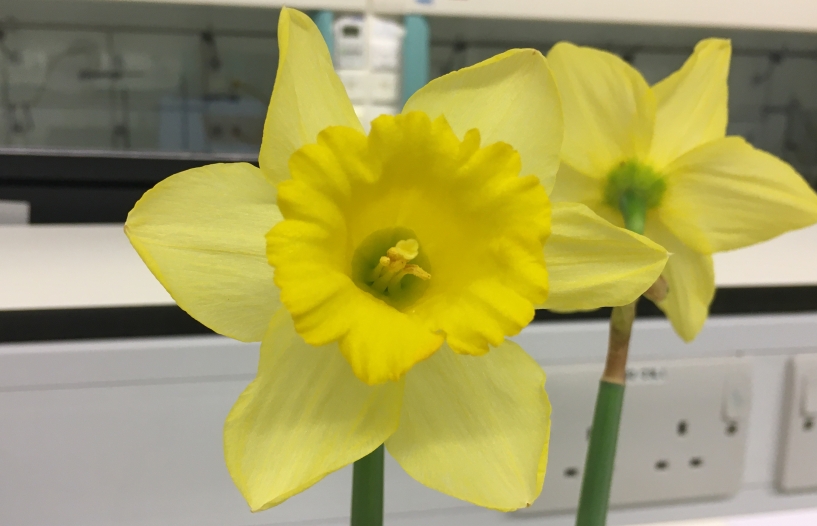 A daffodil in the lab.

As the national flower of Wales and the symbol of cancer charities in various countries, the daffodil holds a place in the hearts of many. In this post we explore some interesting chemicals that this well-loved flower contains.

1. The image above shows a traditional daffodil (botanical name: Narcissus) in front of a fume hood. Daffodils are native to Europe, northern parts of Africa, western parts of Asia and the Mediterranean. The flowering plant is a member of the Amaryllidaceae family, which contains around 1600 different species of plants in total. There are between 40 and 200 different species, subspecies or varieties of the daffodil and over 25,000 registered hybrids. They can differ in size, colour and number of floral leaves, but the one we all know and love is of course yellow.

However good they look, daffodils are in fact quite poisonous. In 2012, 10 members of Bristol’s Chinese community were hospitalised after mistakenly confusing daffodil stalks for a species of chive (BBC News, 2 March 2012), and every spring more cases are reported. The toxicity arises because daffodils are a source of alkaloids, a class of organic compounds which have pronounced physiological effects on humans.

Galantamine and lycorine are two of the alkaloid compounds found in daffodils. Galantamine has been used for decades in Russia and Eastern Europe for treatments of myasthenia, myopathy, and sensory and motor dysfunction associated with disorders of the central nervous system, and it is now FDA approved in the US for the treatment of Alzheimer’s disease and other memory impairments (vascular ones in particular) (J. Ethnopharmacol., 2004, 92, 147-162). Conversely, lycorine isn’t used for medicinal purposes – in fact, it has the opposite effect because it’s toxic, causing severe vomiting and diarrhoea when ingested. It is present in the daffodil’s bulb and therefore is usually consumed accidentally when the bulbs are confused with onions. 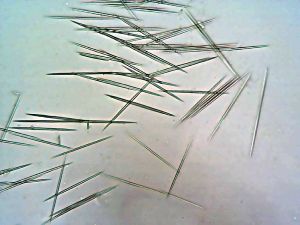 Figure 1: Raphides. These are from variegated ivy, which, like daffodils, will make you itch.

The leaves and sap of daffodils also contain raphides, which are needle-shaped calcium oxalate crystals (Figure 1). They are involved in controlling calcium levels in the plant tissues, but also provide some protection to the daffodil from grazing animals and insects. These should also not be swallowed as they are likely to cause severe burning and irritation to the lips, tongue and throat. Raphides are the cause of daffodil itch, one of floristry’s occupational hazards, when they are released in the sap (Dermatitis, 2009, 20, 63-78). See our post about spinach for another example of the biological role of calcium oxalate crystals.

2. When first launched as a medicine, galantamine was extracted from snowdrops that had been grown specifically for the purpose. Snowdrops have the latin name Galanthus nivalis, which is where galantamine gets the first part of its name; for a long time it was actually spelled galanthamine. The second part of the name arises because it contains a nitrogen atom that makes three separate bonds, which makes it an amine. Because of the limited amounts available from snowdrops it cost up to $40000 per kilo in 1996 (J. Ethnopharmacol., 2004, 92, 147-162). Although it had been synthesised in the laboratory in the 1960s, with a mere 1.4% yield the procedure was not good enough to use commercially (J. Chem. Soc., 1962, 806-817), and it was not until 1998 that a commercial synthesis was reported (Tetrahedron Lett., 1998, 39, 2087-2088).

Acetylcholine (Figure 2) is the molecule which is released by the body in order to transmit signals between nerve cells, and it is broken down in the body by the enzyme acetylcholinesterase. Sufferers from Alzheimer’s disease have decreased acetylcholine levels which can lead to cognitive problems (because their nerves stop communicating with each other), so if we can stop its breakdown then we can help alleviate these problems. This is how galantamine helps: it is a selective, competitive and reversible acetylcholinesterase inhibitor, meaning that it stops the enzyme working for a bit by occupying the part of the enzyme where the acetylcholine normally goes. Scientists have managed to grow crystals of the enzyme with the galantamine in place, which means we can see exactly how it interacts with the protein (J. Med. Chem., 2012, 55, 10282-10286). You can have a look yourself using an interactive 3D viewer, or you can just look at Figure 3. The galantamine is the bit in the midddle, in the standard colours chemists use for elements: carbon is grey, oxygen is red, and nitrogen is blue. All the coloured bits around the outside are the bits of protein molecule that are joined together to make the acetylcholinesterase enzyme, and which make a pocket just the right size and shape for the galantamine.

Figure 3: A galantamine molecule sitting in part of the acetylcholinesterase enzyme.

3. Because galantamine has two chiral centres it comes in enantiomeric forms, and for medical use it is important to get the correct one (which is (-)-galantamine) – the problem is that laboratory synthesis generates equal amounts of both isomers of a precursor molecule called narwedine (Figure 4). Usefully though, narwedine has the property that when it crystallises it forms a racemic conglomerate; that is, a molecule of the compound has a much greater affinity for other molecules of the same enantiomer rather than molecules of the opposite enantiomer. This means that when crystals form, each individual crystal contains molecules of just one handedness, and in principle they could be separated by hand into left- and right-handed forms. This is exactly what Louis Pasteur did with crystals of sodium ammonium tartrate when he discovered chirality (Acta Cryst., 2009, A65, 371-389).

Figure 4: The structures of narwedine and galantamine, with the chiral centres asterisked.

This would be a laborious process to do on an industrial scale, but one of Pasteur’s contemporaries identified an answer. The two isomers of narwedine readily interconvert in solution, a process known as racemisation, and if one of the isomers is removed then it will spontaneously reappear, generated by conversion of the other isomer (Figure 5). This idea concerning what happens when an equilibrium is perturbed is one of the fundamental principles of chemistry, and is known as Le Chatelier’s principle, after Henry Louis Le Chatelier.

Figure 5: The mechanism by which narwedine racemises, which is simply a Michael reaction. The reactions are in fact both completely reversible, but if the (-)-narwedine is removed from solution by crystallisation, more of it is made, thus satisfying Le Chatelier’s principle. Note that narwedine is itself a base, so this reaction is spontaneous.

The upshot of all this is that if a crystal of one isomer of narwedine is put into a solution containing both isomers, the new crystals that grow contain that isomer only. At the same time, this depletes the amount of that isomer that is in the solution, and the system rebalances itself by converting some of the other isomer. This process keeps on happening until such time as all the narwedine has been converted to the desired form and has crystallised – a process known as total spontaneous resolution (J. Org. Chem., 1994, 59, 5463-5465). This is exactly what the first commercial synthesis did – they put in a tiny amount of (-)-narwedine, and let Le Chatelier do the rest. Once the narwedine has been resolved, it can be converted to galantamine without losing the resolution.

This works well, but only under very tightly controlled conditions, so was later updated to use a different method; in this case (Tetrahedron Lett., 1998, 39, 6777-6780) di-p-toluoyl-D-tartaric acid (Figure 6) was used as a resolving agent. This is a chiral derivative of tartaric acid, and the (-)-narwedine forms crystals with it much better than the (+)-narwedine. This means that when crystals of narwedine are grown from solutions that also contain the resolving agent, they contain just the (-) form of the narwedine, and all of the other form is again converted according to Le Chatelier’s principle, just like above.

The difference here is that the crystals also contain a molecule of the di-p-toluoyl-D-tartaric acid – they form a co-crystal. This is not necessarily a problem – in fact it is a good thing. The final stage of the conversion of narwedine to galantamine is a reduction, and it turns out that this can be achieved on these co-crystals without actually dissolving them. This is of benefit because it prevents the re-racemisation of the alkaloid during the procedure. 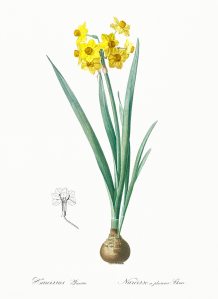 So, it turns out that practically the same system that Pasteur used to deduce the phenomenon of chirality can be used to transfer chirality to other molecules – see our post on tartaric acid for more details. However, galantamine remains expensive – between £15000 and £18000 per kilo (UKRI), and is still mainly extracted from bulbs. It has recently been found that growing daffodils under poor growing conditions increases the amount of the drug that they contain, and this is currently the object of research in Wales (J. Alzheimers Dis., 2017, 55, 1321–1325).

So next time you’re wandering lonely as a cloud and admiring the daffodils, remember they could be contributing to the fight against disease.